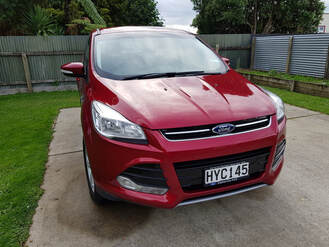 In 2015 God told me that I was going to get a new car. I was pretty excited by this and went looking at car sale yards to see what I would like. I bought a late model Suzuki Swift, which I quickly realised was too small for my needs. I was doing a number of motorcycle shows at that point and the car was just too small to carry all that equipment. When I thought about it, God had told me that I was going to have a new car, not a second hand one, so I had obviously jumped the gun.
A short time later I bought a brand new Ford Kuga (Escape), which I was very happy with. It was bright cherry red and a real eye catcher.

In 2018 I was feeling a bit over the bright red car and started thinking about what I would like to have if i was going to get a new car. I had no intention of buying a new car, but was just thinking about what I would go for if buying a new car was an option. I liked the style and technology of the Ford, so thought I would get a Ford Escape. I would go for silver rather than red, because, as I said before, I was kinda over the bright red car and wanted something less in your face. Tinted windows were a must. The red car didn't have these and I wanted them because I often carry computers in the car for my work, and it would make them a lot less visible. I decided a navigation system would be a good feature to have as I do a lot of traveling in the car, often to new destinations. A reversing camera would also be good. The red car had neither of these features.

In the past God had used number plates both on one of my trucks and on a motorbike to guide me, so though about what I would like to have on a number plate. In my musings I decided on LGH641. The reason behind this choice is as follows: LG (my first two initials and also my mother-in-laws pet name for me), H (holy), 6 (the Biblical number of man), 4 (for), 1 (The number for God), so it would read LG, Holy Man For God. Well, a few days later I was looking on TradeMe, a New Zealand buy and sell site. I wasn't looking at cars, but just browsing and would you believe it, an advertisement for a silver Ford Escape popped up on the page with the number plate LGH641 !  Needless to say, I bought this car and it was everything I thought of, absolutely ideal.

God knew my thoughts and chose to bless me with this car without me even asking for it or putting it on my want list. He is awesome and never fails to amaze me with His goodness and wonder!